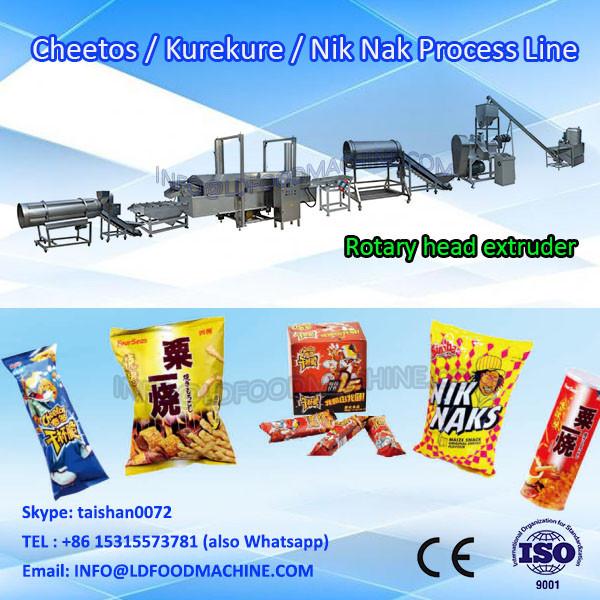 The Kurkure corn meal is moisturized in the flour mixer with water and fed to the Rotary die Extruder. In the extruder, due to excess heat and pressure from the screws the...
Contact Now WhatsApp
Product Groups
See More

The Kurkure corn meal is moisturized in the flour mixer with water and fed to the Rotary die Extruder. In the extruder, due to excess heat and pressure from the screws the meal gets heated and the moisture content gets reduced. The meal passes through the die and gets cut by the cutting knifes into required lengths.

The Kurkure are fried in cooking oil and then cooled before flavoring. Or directly Seasoning , is sprayed on the Kurkure surface to improve their taste.

a): Flour Mixer
To mix corn meal with water to prepare the flour for Kurkure

b): EXT76 Dingrun company Rotary Die Extruder
To cook the corn meal and extrude the Kurkure from the die. The Rotary Die twists and curls the meal before extruding giving a uniform texture

c): Automatic Dingrun Frying Machine
To fry the Kurkure in hot cooking oil. The uniform frying introduces the crunchy taste to the Kurkure

d) : Cooling Conveyor
To cool the fried Kurkure and reduce the temperature before packing

e): Automatic Seasoning System
To add required seasoning to the fried and cooled Kurkure to give the different flavors to them

3. Products: This Dingrun line can be used to produce cheetos, kurkure, and nik naks

About installation and after-sale service system:

1. We can provide factory layout according to customer’s factory size in advance.

2. When we received your deposit of this order, we will ask our engineers to prepare to apply the visa, when the machine arrived your country, and we will send two engineers to go and help you to install the processing line, teach your worker(3-4 workers) how to operate the line, until your worker know the line well.

4. Our engineers can provide basic formula for producing the Kurkures/Nik naks and help customer to produce good quality food according customer’s detailed formula.

5. We provide the spare parts will at preferential price for an extended long time.